First off, sadly, un petit dommage - after the photo session for the Combat examples, I managed to drop General Maucune, and had to superglue his horse's ankles. Seems OK - better than I feared it might - but it does occur to me that a Hinton Hunt horse would have withstood the fall without problem. The NapoleoN horses are a bit on the elegant side, though less fragile than the current Minifigs horses, especially the rearing ones, on which the old fetlocks cannot support the weight of the figure if you remove the reinforcing struts.

After going over the Combat examples, I am now thinking that a Unit attacking a village or other built-up area should be limited to a Pinning Attack (2D6) - there must be a limit to how many men they can actually bring to bear against a wall?

Finally, since I am not going to include a rule for Weather, here is the last of my proposed Optional Rules for the MEP draft. This gives a method of determining the actual casualties in a battle (or a day of a battle), which is really of more relevance in the context of a campaign. I hope to have a new draft of the Rules downloadable in a few days. At that stage, it should be the first attempt at a full set - I may even write a Contents page and all that! 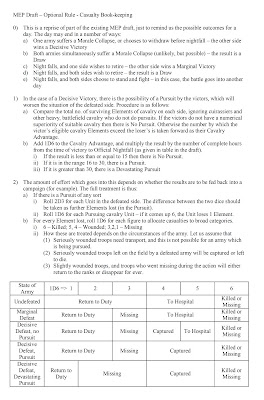 As ever, all comments most welcome. Apologies for the amount of dice-rolling required for the casualty calculations - another advantage of using a computer.
Posted by MSFoy at 22:18