The Grand Tactical Game - Morale (or Not) 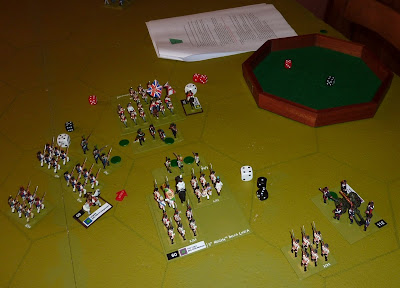 This week I started doing some detail testing of the Combat mechanisms for MEP, and it became obvious that there are a few more changes needed. Simplifying the actual Combat, and calming down the casualty rates a bit, will be addressed in a forthcoming post – probably next week, in which I also hope to do a couple of walk-throughs of examples of Combats. I’ll make a new draft of the rules available at that time.

But the first surprise, and the most radical (for me) was the realisation that the whole subject of morale needed a rethink.

I remind myself that this is a grand tactical game, and the basic units are brigades. As I have mentioned before, it is spiritually close to being a boardgame. In passing, I must observe that I don’t recall seeing very much in the way of detailed morale rules in boardgames, though I’m sure there are some somewhere. Maybe this is a clue.

In a tactical game, I am used to seeing a battalion routing from contact, subsequently rallied – maybe by the personal intervention of a general officer – then turned round, formed up smartly, and sent back into action, though maybe a bit more circumspectly than before.

But this grand tactical game has brigade-sized units comprising Elements which are each a battalion or equivalent. Losses are counted in Elements – a complete battalion is the smallest amount of loss which we bother with. Let’s think about that for a moment – if a 3-Element unit loses an Element as a result of some incident, it does not mean that 750 infantrymen have just been vaporised, it means that the combined effect of actual casualties and demotivation caused by the incident have reduced the combat capability of the unit by an amount which is roughly equivalent to a battalion’s-worth of the soldiers not contributing any more. They may be dead, or hurt, or they may be shocked into uselessness, or they may be legging it to the rear – it doesn’t actually matter. The point is that there are not so many of them taking part - the “loss” is an amalgam of reduction in headcount and loss of morale. The italics are deliberate.

Continuing this theme, when a unit has lost all its Elements it is eliminated. At risk of unnecessary repetition (after all, this is not a difficult concept, though I seem to have some trouble getting the hang of it!), they have not all been wiped out, they have been reduced to a crowd of fugitive survivors, retreating in disorder, probably throwing away all military paraphernalia as they go, to speed their exit. Whatever else, they are not coming back. Again, their elimination is as much – maybe more – to do with morale as it is to do with casualties.

In view of this, I suddenly had a blinding flash of the obvious – having morale tests in addition to this process is too much of the same thing. What if we dropped the stand-alone morale tests altogether? Also, what is the point of having units on the tabletop explicitly marked as Routing when the casualty mechanisms already allow for people running away? A unit which is reduced to zero strength is running away, and won’t come back – that’s probably all we need. OK – we won’t have Routers, so we don’t need to try to rally them, so that’s another morale test scrapped.

The initial draft has morale tests for units which suffer (significant) loss to artillery and skirmisher fire. OK – it is possible to imagine a unit being reduced to zero by continuing fire – they have run away. If they have not run away, and have just been damaged a bit, there is probably a need for some Activation or Command style check to see if they are prepared to follow orders if they are required to advance (or whatever), but the reaction-type morale test as drafted is not necessary.

So I propose to drop the morale tests, and units losing in combat will be pushed back – they will not run away until they are eliminated. There will be no Routers, and no rallying of Routers.

I feel a bit elated at removing a sizeable piece of fiddle-faddle from the game – I am also nervously aware that the morale tests may be back next week, after some more playtesting, so am not going to make too much of a fuss about it!