I've had these for a year or so. I bought them as part of a mixed lot of Royal Horse Artillery figures, but they are obviously Waterloo-period British Horse Guards, and the style of figure is like nothing I've ever seen before. 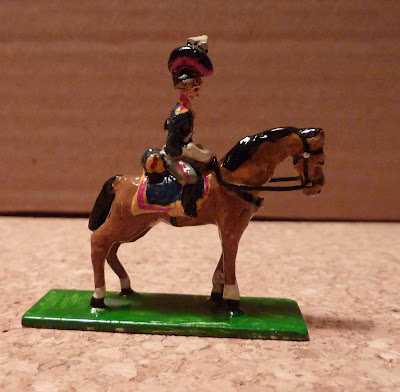 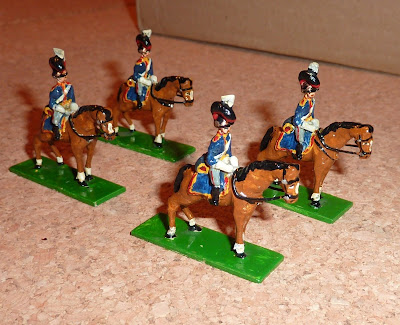 They were shown on the Old Metal Detector blog a while ago, and they generated some interest and a few photos of further examples, but no positive ID.

I'm now selling them on eBay, just because they aren't going to serve any particular purpose in my armies. They are attractive 20mm figures, proper little, shiny toy soldiers - factory painted, hand-animated, soldered on to sheet-metal bases and fitted with soldered wire harness. Entirely because they fit the description in the narrative in VINTAGE20MIL, I have a suspicion they might be very early Greenwood & Ball figures, from the days when Mr Greenwood hand-cast them and Miss Ball painted them, but I admit this is a wild guess.

Of course, they might be out of a Christmas cracker, and they're going now, anyway, but I thought I'd have one last go to see if someone can identify the maker. Any ideas?
Posted by MSFoy at 10:51