Rather later than I had hoped, here are some examples of Combat under the draft MEP rules, which can be downloaded from here.

In this example, Maucune's French Division of two Units (brigades), coming from the bottom of the pictures, attacks a single British Unit. Maucune is visible, with his right hand Unit. In all that follows, black dice are for the French, red for the British. 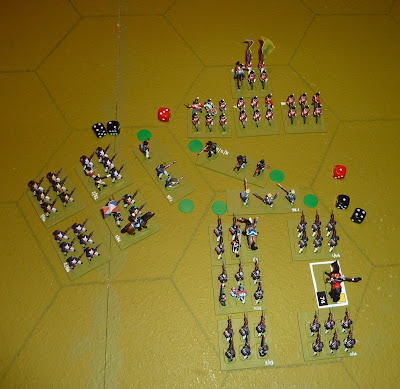 The first action is an exchange of skirmish fire - each of the Units has a skirmish (SK) value of 2 (denoted by the bright green counters next to each skirmisher base - yes, in a sensible example I would have skirmishers mounted individually, but I haven't), and the Brits choose to split their skirmish strength so as to take on both sets of French skirmishers. Skirmishers hit with a throw of 1 - in the exchange with the French Unit which has Maucune present, each side scores 1 hit, so they cancel out - no net effect; in the other exchange, both sides miss - no net effect. 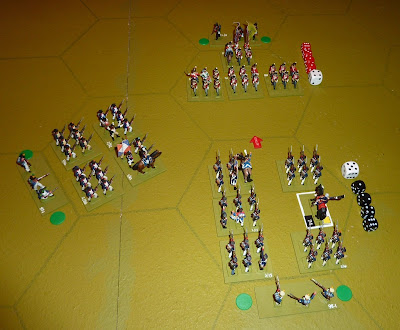 The actual Combat is fought as two 1:1 Combats. Because there is no requirement for one Combat to be fought first, Maucune (the attacker), chooses to start with his larger Unit. This Unit has 5 Elements present (don't count the skirmishers) - the max number of Elements which can count towards PV is 4, so PV is 4. The adjusted PV has a bonus for the presence of a friendly Unit in the Combat, and for the presence of the General. Adjusted PV is theoretically 6, but since a throw of 6 is always a miss anyway, 5 is the maximum. The French are going for an all-out attack (in both Combats - must be the same for both), which means they roll 4D6, and they are looking for throws of less than or equal to the adjusted PV of 5 (for clarity, I've set the required throw on a large white dice). The British Unit has 4 Elements, so it may match the full 4D6 allocation set by the French, there are no adjustments applicable, so the throws have to be less than or equal to 4 to hit. In the event, each side scores 3 hits. 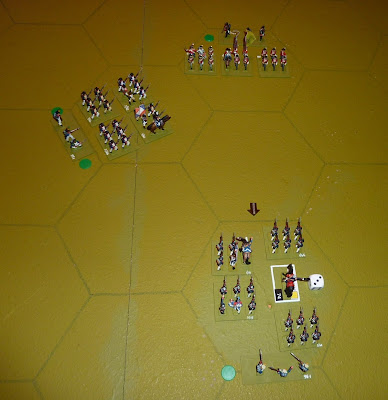 Because this is a tie (a "score-draw"), each side loses 1 Element (and therefore 1 from its SK), and the attacker (the French Unit) retreats 1 hex. We have to test to see if Maucune himself is a casualty - the Unit lost 1 point from its PV, so a throw of 1 will put Maucune in trouble. In fact it's a 3, so he's OK. Disgruntled, but OK. 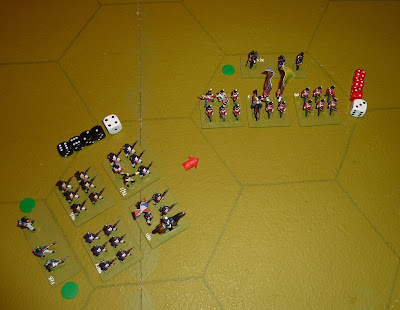 Now the second French Unit attacks. It has 4 Elements, but it gets no bonus for multiple attackers, since the support has disappeared. No adjustment - PV is 4, it throws 4D6, and required throws for hits are less than or equal to 4. The British Unit now has only 3 Elements present, so it is restricted to 3D6, and throws must be less than or equal to 3. 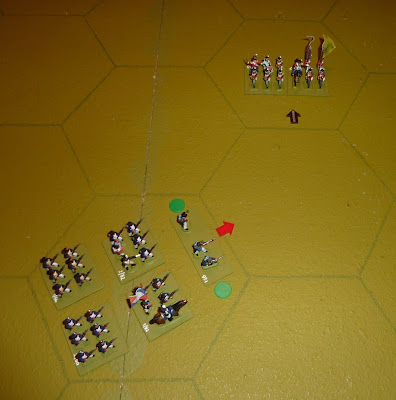 In the event, the French have 1 more hit than the British, so the British Unit loses 1 Element (i.e. 1 from its PV), plus 1 from its SK - so the skirmish capability is now eliminated - and retires 1 hex. The French lose nothing, and since they were the attackers, they may advance into the vacated hex if they choose to do so.

Attack Against a Village 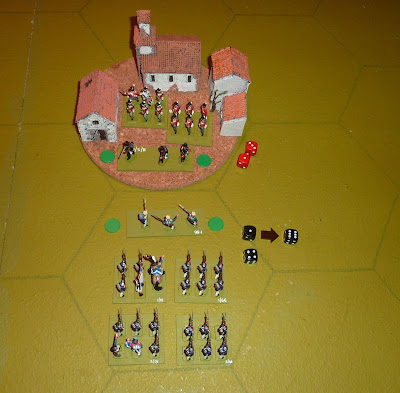 French Unit advances against a small British Unit in a rather unattractive village. First action is skirmishing. SKs are both 2, so each side throws 2D6, looking for 1s to hit. Both score a hit, but the British skirmishers are a Protected target, since they are in hard cover, so a checkroll of less than or equal to 2 is needed to confirm the hit. The checkroll fails (it's 6), so the British have a net skirmish advantage of 1 hit. French lose 1 skirmish point. 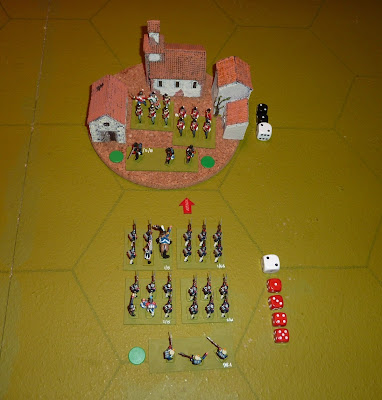 Now the Combat - French have 4 Elements (i.e it's a brigade of about 3000 men), and are attempting all-out attack against cover. PV is 4, so full 4D6 attack is allowed, but PV is subject to a deduction of 2 since the defender is in a village, so the dice must come up 2 or less for hits. British defenders have a PV of 2 (2 Elements), so may roll only 2D6, which must come up less than or equal to 2. 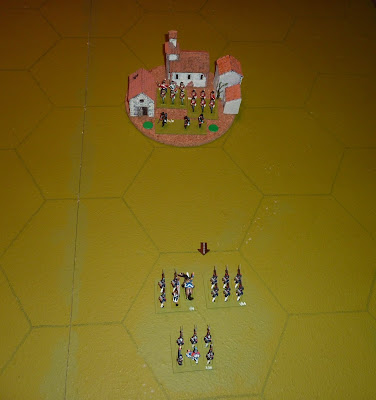 The dice roll gives the British a rather lucky win by 2 hits to 1, so French lose 1 Element (and therefore, also, their last SK point) and retreat. 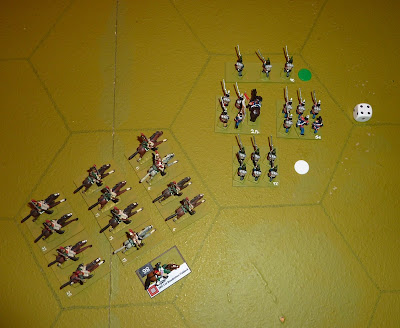 In this example (and apologies to any Spanish readers - it's just an example!) we have a Spanish Unit which has 3 Elements and a Quality Bonus of -1 (white counter), and thus a PV of 2, and an SK of 1; it is charged in the flank by a Unit of French dragoons which has 3 Elements, plus a General. Note that the Spanish can't use their skirmishers here - skirmishers can act only to the front of the Unit, and, in any event, cannot act against cavalry. So the first thing to check is whether the infantry can manage to react to the charge, forming squares. For this test, their PV (which is 2) must be reduced by 2 because of the flank attack. The minimum of 1 for adjusted PV comes into play - a throw of 1 will allow them to form squares. In the event, the throw of 4 means they are unable to react in this way. 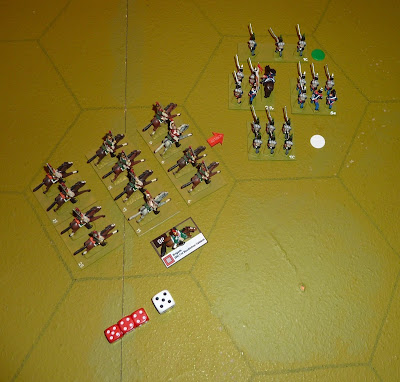 In this example I used red dice for the French - yes, it was a mistake. The French have a PV of 3, so may throw a max of 3D6, and the adjusted PV is 3, plus 1 for the general, plus 2 for the flank attack. The dice must turn up 5 or less to score hits. A flank attack is unopposed, so the infantry do not get to roll any dice in reply. In this example, the cavalry score 3 hits - the 1st hit is the white counter plus 2 Elements (plus the SK point), the 2nd hit is the last remaining Element, the 3rd hit is not required. The infantry have been eliminated, and the cavalry, if they choose, may occupy the vacated hex.
Posted by MSFoy at 19:10