Yet another off-topic story of no consequence, about some odd-ball I used to know. This one is not only off-topic, but also definitely off-colour, so if you don't fancy the idea, or are easily offended, please skip it and go and read something else. I quite understand. Enjoy the rest of your day.

This recollection was sparked by a recent conversation with a mate of mine, in which we revisited some treasured tales of Pauly, a mutual friend, whom neither of us has seen for some years. 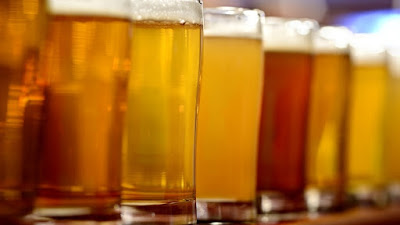 I first met Pauly when he was about 30. He's a native of Portstewart, in County Londonderry, though subsequently a Glaswegian, and I came to know him when I moved to this area because he was a spare-time musician (such lost souls tend to attract each other in the void, like asteroids). He was also renowned as a volunteer fireman in a local village.

He played the uillean bagpipes, and pretty well, too, I believe, though I never heard him. He was also a drummer (of sorts). As a self-taught drummer he was passable, but had a very narrow range of styles and was completely unable to play quietly, which is definitely a career limitation for a drummer. He and I were once involved in a wedding band in a local village hall, and the event was so loud and so unruly that the police eventually stopped it - that village hall has never been allowed to put on music since that occasion. Not even for children's tea-parties. This is fame of a sort, I guess. 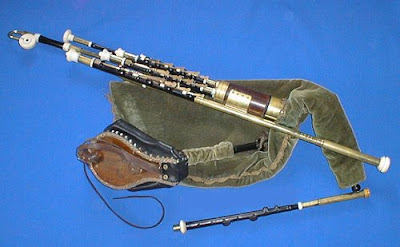 That brings us to the underlying theme of this story - wherever Pauly went, if there was drink involved there was frequently trouble. He was a lovely man, amusing, and generous to a fault, but he stands out in my personal annals as one of the very few genuine desperadoes I ever met.

When I first met him he had just recovered from an "accident", in which he had dived into the sea from a cliff, and been lucky to escape with only a damaged vertebra in his neck. When pressed on the matter, he claimed that he had done this "for a laugh", to entertain some friends. He also claimed that he was unlucky in that he had been assured that it was safe to dive from this cliff, though he chose the wrong cliff (the assurance being in respect of a nearby, but totally different cliff), and he accepted that he was probably fortunate to survive. 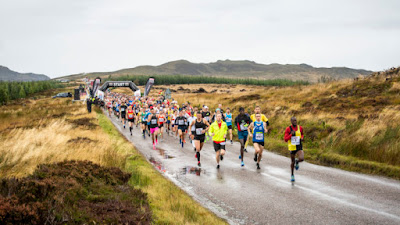 Pauly was ex-army. After he left the army he appears to have taken "a few years out" - his main interest (apart from wild bouts of heavy drinking) was in keeping supremely fit. He was a regular, and very successful, competitor in various extreme competitions such as the Iron Man triathlon events - he was a hill runner extraordinaire, a mountain biker, swimmer, wind-surfer, diver and general madman. Whatever he did, it was invariably over the top. My mother would certainly not have allowed me to play with him, I think.

He told many hilarious tales - almost always self-deprecating, with himself as the butt of the humour. After his part-time spell as a volunteer fireman, he took a permanent job with the fire brigade in a nearby town (Musselburgh), and he got married and had a couple of kids and showed definite signs of settling down, though the fire service is probably never very calm. Obviously he did his share of cutting people out of motor wrecks and searching buildings for bodies - none of which he talked about. Later he was promoted to be a fire officer in a market town in the Borders, he moved away from these parts and bought a lovely old house in the grounds of a private school. His wife was a psychiatrist - a super lady - I guess she calmed him down. I visited him one weekend in the Borders, on an off-day. He was very happy, his new home was splendid, his family was everything to him, and I realised that he was no longer the crazy man I used to know. I guess this is in itself a happy ending, so I wished him well, and apart from occasional Xmas emails I haven't been in touch since. 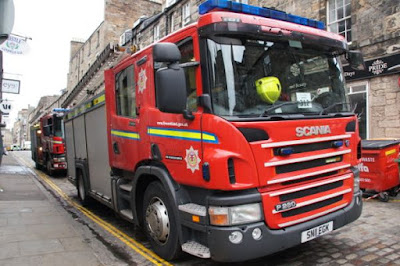 My favourite of his fire service stories concerned the rescue of a very large lady in Musselburgh who decided to take a bath one Saturday night, when she was drunk. Alas, the plastic bathtub cracked under the weight, and she was trapped in the wreckage. The alarm was raised when the bath-water brought down the bathroom ceiling in the apartment below. We should draw a veil over the details of this episode, but it does give an interesting insight into the hazards and the delicacy necessary in the work.

Pauly was at his most entertaining recounting his adventures hitch-hiking around the USA and South America. His post-army drop-out period started off in the States - he managed to support himself by playing the bagpipes in malls and doing odd jobs. He was arrested on a number of occasions for possessing weed, though this only became nasty when he was jailed in El Paso - the police picked him up for vagrancy, confiscating all his money and papers to make the point. He was in serious trouble since his visa had expired. They kept all his stuff (including the bagpipes) and did a deal by which they dumped him and another hitch-hiking pot-head in Mexico, on the understanding that they did not wish to see him again.

He had a pretty wild and very confused time in South America.  He was there for almost a year. He made long trips on lorries, and in railway trucks. He mixed with some of the most iconic dead-beats of history. He made a little pocket money doing labouring jobs, cleaning jobs, washing dishes - whatever came up. It was never legal - he never had valid papers for being anywhere - he still had his British passport, but that was it. He deliberately kept a low profile at all times.

At one stage he arrived after a long ride in a truck at some coastal city (it might have been Valparaiso - it doesn't matter). He headed off to an apartment for which he had been given the address, dropped his bag off and was dragged down to a beach for a party. He spent the night drinking with a bunch of layabouts. At some point money was put into a hat, and someone went off and brought back some food. Pauly subsequently became very ill, and passed out on the beach. He was awakened by the tide coming in...

He was really not feeling good at all, and was disappointed to realise that he had (to put it in a straightforward manner) soiled himself during the night. He made an attempt to clean himself in the sea, with limited success. He still had a small amount of cash, so he set off to put matters right. He went to a street market in a poor area near the harbour, where he just had enough to buy a very cheap pair of jeans (men's - medium) and some underclothes. With commendable initiative, he walked into a shopping area, entered a supermarket and locked himself in a customer toilet. He cleaned himself up, took the plastic bag off his new jeans, wrapped up his soiled old jeans in the bag, and got rid of the evidence by throwing it out of the window into an alley-way. Only then, when he unfolded them, did he realise that his new jeans from the market stall were actually a denim jacket.

He did magnificently. He put the jacket on as a kind of loin cloth - upside down, back to front - tied the sleeves around his thighs and pulled his tee-shirt down as far as it would go. He said that he looked unbelievable, but he walked out of the crowded store - no-one gave him a second look, apparently - and made his way to the apartment. Every day, in some dubious part of the world, people must be performing acts of improvisational heroism like this which put us all to shame. In his way, Pauly was a legend. Certainly, his adventures are still told in hushed whispers.
Posted by MSFoy at 19:07