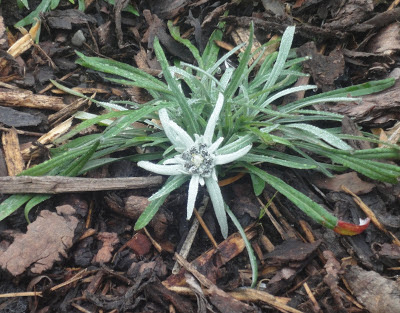 On last year's Austrian holiday, we bought some packets of Edelweiss seeds (leontopodium alpinum) in a gift shop, along with some picture calendars, a silly hat, a cuddly-toy marmot* in lederhosen, etc - as one does on holiday.

We knew the seeds wouldn't grow, so promptly forgot about them. However, this Spring, Mme La Comptesse found them in a drawer (I was going to say "unearthed", but I'm a stickler for accuracy) and reasoned that a plant which is famous for growing at sub-zero temperatures, in one of the most harsh winter climates Europe has to offer, might just make it in Scotland.

Accordingly, seeds were put into little pots and carefully nurtured in the attic bedroom, then the seedlings were moved to a coldframe, and eventually the strongest of the baby plants were planted out. I was highly sceptical about the entire operation, and tried (in my miserable way) to do a bit of gentle expectation management.

To celebrate this event, I had a look on YouTube - confident that the song Edelweiss must have some of the most toe-curling performances imaginable - so that we could all sing along nicely (sit up straight at the back, please). I briefly considered a heartwarming duet version by John Denver and Julie Andrews, but it was so cute that I had to be dragged out of the office feet first before I suffocated. I also was tempted by this clip, which is getting away from the point a bit but is crass enough to be of interest, but I eventually picked the Hutterer sisters, Sigrid & Marina, with this version - faultlessly sincere, wholesome and - well, just really nice.

If you find you are not singing along, then you should be ashamed.


*By the way - earlier reference to marmots reminds me that I now know quite a lot about them, since this is what Google thinks I meant when I search for information about Marshal Marmont. And, yes - since you wanted to know - the cuddly-toy marmot does squeak when you squeeze it, but - surprisingly - not when you hit it with a chair.
Posted by MSFoy at 15:17