In which we get some high-quality free scran and visit the Highlands briefly, and Martina loses it completely in 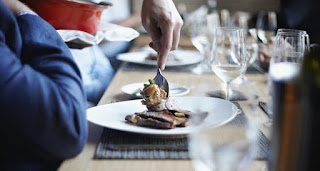 On Wednesday evening we went into to have our scheduled prize meal at the expense of the Sunday Times, which I mentioned previously. The restaurant we had selected (from two on the list for ) was The Honours, in . I had never visited the place before, though I used to be an occasional customer of Cosmo’s, which occupied the same premises back in my days of business lunches. 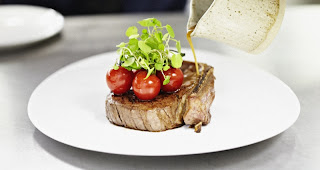 The Honours was opened last year by Martin Wishart, who is a Michelin-rated chef and restaurateur, and is really rather outside the range of places we would normally patronise, so it was a delightful treat for all sorts of reasons.

I had a starter from the day’s specials whose name I could not possibly remember, but it was a very light chowder of artichokes and seared scallops, frothed cappuccino-style and finished with almonds and grated tartufo bianco, while Mme la Comptesse had classic smoked salmon. I managed to squeeze in a small pasta course – buttered tagliatelle with morels and roasted garlic – and then we shared the Chateaubriand, which arrived complete with French fries cooked in duck fat. Madame was driving, so I was the only one drinking – ordering wines by the glass does have some advantages for sight-seeing the wine list. I had a Jurancon Sec (2010 Clos Lapeyre - very nice) with my starter, and an excellent (and quite inexpensive) Cotes du Ventoux (2011 Domaine Perrin) with the steak.

My wife had a crème brulée to finish and I had the cheese platter – not least so that I could have a second glass of the Ventoux. All absolutely first rate – superb quality and service. We didn’t get close to our permitted £250 budget, but we must have spent about half of that, so my thanks to Mr Wishart and to the Sunday Times for making it possible (and to my wife, of course, for entering the competition!). If you are in and are feeling especially affluent, I would recommend the place without hesitation.

Only slightly odd note was introduced by an American lady at the next table, who insisted that the rack of lamb, which the menu noted was only available for two people, should be served as a half portion for her – the assumption being, presumably, that Mr Wishart had made a mistake about this or else that the restaurant would find another customer prepared to volunteer for the other half. After a lengthy harangue, of course, she got her half rack and then proceeded to complain about it. Before she left, the manager apologised unreservedly to her – I guess for having the temerity to open a restaurant in the first place. Why do people do this? – do they feel it makes them appear important, or ”used to better”, or specially knowledgeable?

Great evening, anyway. Unaccustomed as one is.

On Thursday we drove up to the , partly to fit in a short break at the end of my son’s half-term hols and partly to visit the new Visitor Centre at the Culloden battlefield. Since it is (finally) running well, we took my Mitsubishi truck – it is rather thirsty, but well suited for getting out of mud.

Weather for our run was dull but dry. We went over the Forth Bridge, then up the M90 and A9 as far as Dalwhinnie, then across to the West to Spean Bridge (where we stopped to take a look at the Commando memorial), and finally up the Great Glen, past Lochs Lochy and Oich to Fort Augustus. We spent a little time exploring the locks on the Caledonian Canal at – always fascinating – which work like staircases to get the boats up and down to cope with the different water levels in (in this case) Loch Oich and Loch Ness.

We had a slightly bad break – this time of year, a lot of the guesthouses in the have closed for the Winter – my B&B of choice was not available, but I had booked a decent-looking place online which offered a family room. In reality it was clean but a little disappointing – the real bad news was that our landlady’s very enthusiastic Full Scottish fried breakfast on Friday morning gave us all mild food poisoning which is still lingering, which was not a positive contribution to the trip. We visited a cheery Free House pub on the Thursday evening (before the condemned bacon episode) which had good bar food, but a disappointingly standardised range of beers (Stella, John Smith’s, freezing cold Guinness, draught cider...). The only thing I fancied was Belhaven’s Export, which is brewed 10 miles down the road from my home, at . Decent enough pint, but I had hoped we would get something more interesting than that. Ach well. Here’s some pics of our run up, and of . 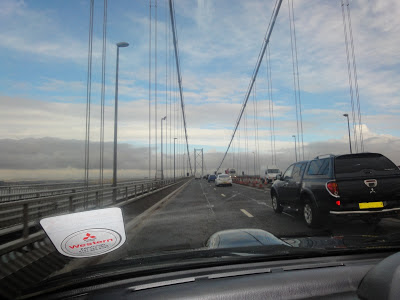 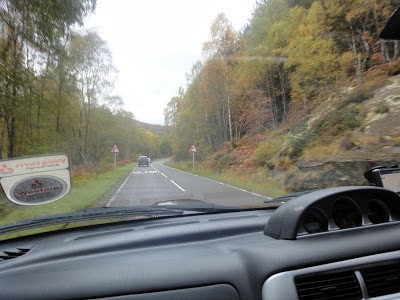 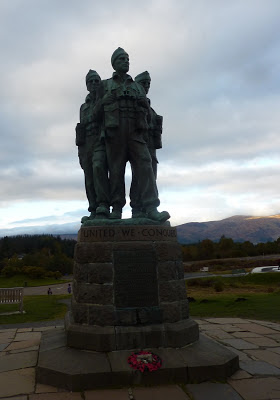 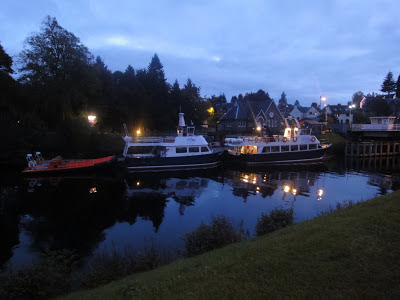 Friday was the day to visit Culloden. Pouring rain. Not to worry – this is , after all, so might as well see it at its best. We drove the length of Loch Ness, negotiated downtown , and got to Culloden without problem, where I got my first sight of the new Visitor Centre. Impressive. Big. Expensive.

I’ve been to Culloden a number of times before. As a kid, I remember being bewildered by all these clan memorial stones hidden in the middle of a forest – the field was deliberately planted with trees in the late 18th Century so that it could not be preserved as a Jacobite shrine. I think they cut down the trees and restored things a good bit around 1970 or so. Last time I was there (I am surprised to recall) was maybe 20 years ago, when the previous Visitor Centre was open, and I was very favourably impressed at that time. Guided tours were provided. A young man in appropriate Jacobite attire marched a party of visitors around the battlefield – we walked the line of the Highlanders’ charge, stood in the Government lines with Barrell’s and Munro’s regiments – the lot. It was nicely done – any children in the party were equipped with wooden swords and targes and recruited to keep the grown-ups in order. The guide was personable and knew his stuff, and could answer any questions you might have. I have always had a hankering to go back.

Well, the world has moved on. The new Centre is superbly laid out. The exhibits are terrific, and the timeline format usefully explained a few things I had never fully understood before – for example, I had never realised the wider context in which Prince Charles’ rebellion was set – just why the Hanoverian English monarchy were so concerned about it. I realise that I should have, but I had never been aware that Charles originally intended to invade a couple of years earlier with full support from the French army, and that his eventual effort was an attempt to go it alone, since the French had given up on the idea (though they lent him some troops, of course).

We saw a couple of excellent little presentations on the nature and weaponry of the armies – very well done. If we’d known, what we really should have done was arrange to get there for 11am so that we could join the once-a-day guided battlefield walk with an actual human guide.

First major problem on Friday was the rotten weather, but we had sort of prepared for that. Second problem was the PDAs they hand out to visitors. On the face of it, this should work well – the machines play you a structured commentary, cued (and this is the clever bit) by GPS – when you arrive at the next key location, the PDA chimes in with the next bit of the commentary. Very good. They do instruct you when you are given the machine that you have to stand still until each section has finished – if you keep walking things will get mixed up. What they do not tell you is that if you touch the screen to activate the sections of copious back-up information – as you are encouraged to do in the commentary – the PDA gets confused.

My wife’s machine became terminally mixed up quite quickly, and after a respectable time she gave up on walking around in the rain and the mud and retired to the nice warm Centre.

Being more grumpily determined, I walked back to the starting point and started the tour again – my son and I then studiously avoided the extra information buttons and stuck with the basic script. And it conked out again. One of the touch fields on the PDA screen is WHERE AM I? At one point we were out beyond the big monument, by the clan graves, but both our PDAs showed us as being some distance away, behind the government lines. Aha. So that’s why it didn’t work properly – the GPS system was on the blink.

At that point we, too, had had enough of the weather, and I was beginning to suffer from the bacon problem, so we withdrew from the field. To anyone who intends to visit the place, I would recommend it wholeheartedly, but take plenty of money with you, and make sure you arrive before 11am in good weather. I have very few photos of our visit, sadly, because it was so wet, but the Well of the Dead kind of sums up the mood of the day. 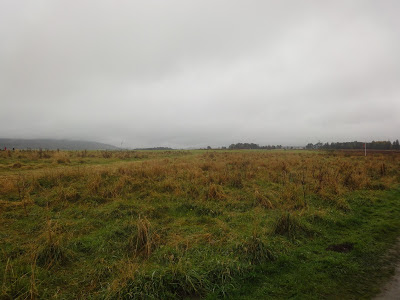 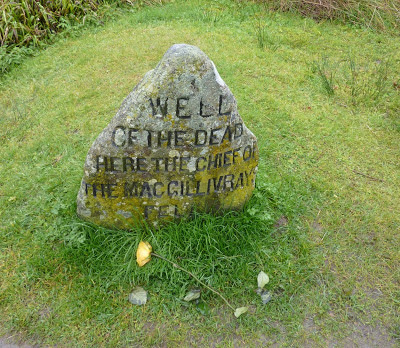 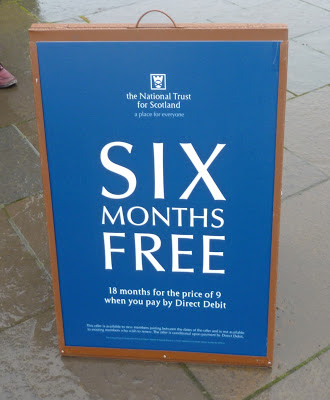 And the National Trust for seem to have their own alternative
arithmetic – if you can explain this to me, I’d be obliged.

The strange business with the GPS, unbelievably, had an echo on the way back to , which leads us to wonder whether there is something unusual about the area.

My SatNav is a Garmin Nuvi250 (or something) which is a few years old now, but we regularly refresh the map data and it has never let us down. There are two ways from Inverness to – one is a single track road along the south of , one is the A82 along the northern shore – the main road to – which is the one we wanted. I decided to use the machine to guide us through the one-way system in , and – to make sure we got the right road out – asked for directions to Drumnadrochit (no, really) which is definitely on the A82.

This SatNav has a very nice young lady’s voice – she is always very patient with us, invariably correct, and doesn’t get at all irritated or petulant if we ignore her instructions. We call her Martina – short for Martina Satnavrilova. Sorry about that, but that’s what she is called.

Anyway – the impossible happened. Martina completely lost the plot in the centre of . We traced the same back-street loop twice before I decided to ignore her directions to do it again, and at one point we were stopped at some lights when we witnessed something very like a brainstorm. A bewildering series of garbled instructions came out in quick succession – you could see the illuminated route changing like a crazy cartoon on the display – then she subsided into a disconsolate “Recalculating – recalculating – recalculating – recalculating...” until I switched off – out of pity, really. It isn’t pleasant to see one’s friends in trouble. 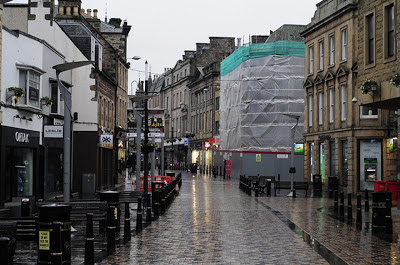 We adopted the older method of peering through the rain and spotting signs for the A82, and got out of town safely. Next time we risked the SatNav, of course, it worked flawlessly, and once again spoke with great confidence and authority – but our relationship may never be the same again. We have seen frailty. Feet of clay. Not exactly weeping, but something close.

Makes me wonder, though, whether there was a problem with satellite communications in the area on Friday. I guess the Duke of Cumberland just used maps and compasses and stuff, back in his day.
Posted by MSFoy at 00:44