ECW - And Still They Come 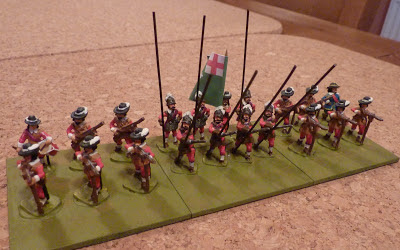 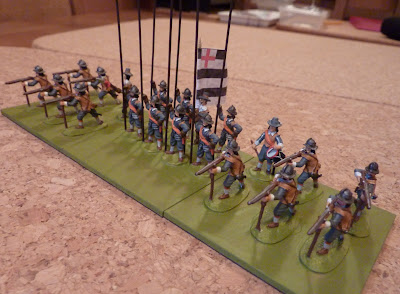 Another two units of foot ready for action - here are (in the red) Sir Thomas Tyldesley's Regiment [R] and John Booth's Regiment [P]. Just for a change, the Hinton Hunt unit are the Royalists this time, the Parlies being (mostly) Les Higgins.

I find that I'm still doggedly making sure that the two armies build up at the same pace - it occurred to me today that it must be important for some reason. Since I am still some way short of being able to stage an actual battle, I'm not sure why I am being so careful to keep everything in step. Not to worry - I'm happy with progress, which continues to be steady rather than dramatic.

I now have six units of foot ready (3 each, naturally) and two of cavalry (even split, again), plus a few general officers. There are another two units of horse and two more of foot ready for painting, so I guess the lead mountain must be getting smaller.

My traditional terminology - "Ready to go in The Cupboard" as a euphemism for "Ready to Fight" - is not applicable to my ECW troops, since they do not live in The Cupboard - they are kept in a series of nice, new, pink box files!
Posted by MSFoy at 16:08