Yesterday was a fighting day, up at Kinross. There were four of us involved - the Archduke was travelling from Westmorland, Baron Stryker was arriving from much closer at hand, in his campaigning sedan chair, I was coming from south of the Forth, and the day's events were scheduled to take place at the legendary Schloss Goya, where the Count did a magnificent job of preparing and planning the game, preparing a very fine luncheon and (whisper it) even serving up lemon cake with afternoon tea.

The battle was a big 'un, no disputing that fact, the scenario lifted from the commandsandcolors.net website. Here is the scenario diagram - we used my Ramekin variant of C&CN - 8 Victory Points for the win. 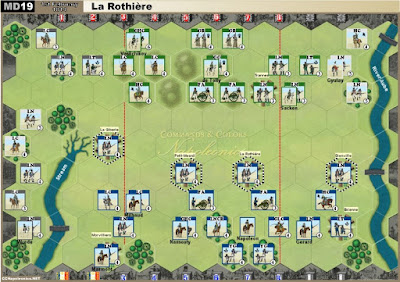 We each contributed some of the troops. Stryker lost the toss of a coin and thus had to partner me in command of the French. A quick squint at the situation, along with the events of actual history, suggested that we were about to receive a thrashing.

Some of the Russian troops in action were very scary indeed - the Guard Grenadiers are very powerful, and the most formidable of the lot were their Guard Heavy Cavalry, who are 6 blocks strong, get a bonus of +1 die in combat and may disregard 2 retreat flags. Oh, jolly good. I was very pleased to see they were well back in the rear of the Allied reserve at the start - I had visions of their casually touring the battlefield, mopping up our army. The rules also bestow upon the Russian infantry a most unsporting reluctance to run away when pressed, and the final outrage is the Mother Russia die before the battle starts - on the day, this provided an extra block of strength for two of the Russian infantry regiments, and also an extra block for both of their field batteries. This did not seem like good news - since I had no idea how an extra-large battery is allocated combat dice in C&CN, we had to agree an ad-hoc rule for the day to cover this. Whatever, the Russian artillery was a major nuisance throughout the day.

It seemed very odd that the Bavarians present were, of course, not on the French side. The French had some Guard Cavalry, and some Young Guard infantry, but it was decreed that, this being 1814, the quality of the French line infantry did not merit the usual +1 combat die for elan in melee.

We (the French) assumed that the Bavarians would be sent across the stream into our left flank, so we set up to give them a hot reception. In fact they didn't attack us at all, so that was an effective feint! The VP rules for this scenario are fairly complex, but include extra points for possession of the 4 villages of La Giberie, Petit-Mesnil, La Rothiere itself (with the church) and Dienville. We duly defended these four villages, but things did not go very well at the start, the Russians drove us out of La Rothiere and eliminated one of our two field batteries. Thereafter the theme of the day was fighting for the villages, and trying to stay clear of the big Russian batteries. There was a good deal of cavalry fighting as the day developed. We started rather poorly, but as time went on we started to wear down the Russian infantry, and we got the VP score to 7-each. At this point we only (only!) had to push one of our Young Guard units across the stream on our left flank, and attack a wood containing a much-weakened Bavarian regiment (and, preferably, take out Wrede at the same time). This was such a vivid prospect that we could actually see it happening, but it was vital that we won the initiative for the next turn.

We duly won that initiative, and in a state of some excitement we attacked tthe Bavarian-held wood, but the attack failed completely, and the response was conclusive. Around this time, the Russian Guard Grenadiers eliminated one more French unit, and during that same turn we were driven out of two more of the key villages, so that, instead of sneaking a victory 8-7 (which would have been a travesty, to be honest), we actually lost - within a single turn - by 9-4. Hmmm. From the jaws of you-know-what.

Not to worry - great game - historically correct result, and it was exciting throughout. Questions will certainly be asked about the performance of the French artillery, but we are confident that (authentically) Napoleon will just lie through his teeth about the outcome, and publish appropriate Fake News in his dispatches.

My appreciation and very best wishes to my colleagues, and especially to Count Goya for his tireless hospitality. Excellent day! 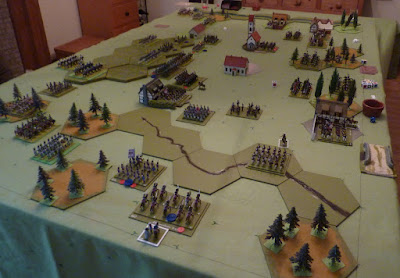