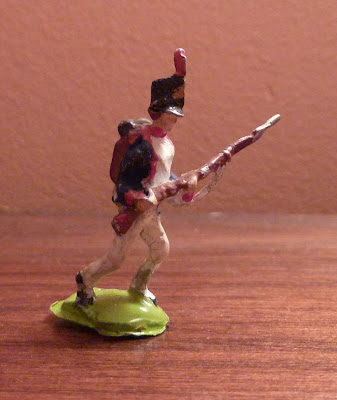 Just received these today. I have no idea what they are - spindly 20mm - French infantry (hats are a bit strange). I thought from the little picture on eBay that they were going to be Hinton Hunt Spaniards painted as Frenchmen, but that is clearly not correct. Bases are small, rounded squares - like HH or Der Kriegsspieler, but they don't look like these makers' figures.

It has been suggested that they might be home-cast copies of DK, but I'm not convinced. Anyone seen anything like this before? I have 12 of them, with varying proportions of bayonet.
Posted by MSFoy at 15:07