Hooptedoodle #84 - Fun with the Recycling 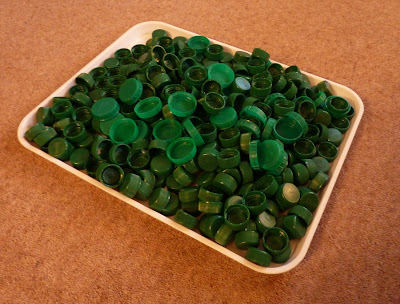 With the completion of the ECW infantry, I was once again encouraged to look at the rate of increase in my collection of painting bottle-tops, and also the likely trend in the sizes of my future figure-painting batches. The two curves do not meet, my friends. I have reached a situation where I cannot throw out a bottle-top of the two proscribed types (Tesco’s fizzy mineral water for infantry and Tesco’s semi-skimmed milk containers for cavalry); the collection is continuing to grow without purpose, simply because it has been doing so for a while and it is hard to break a habit.

So I have decided to keep 40 of the little ones and 30 of the big ones, and throw the rest out. Sorry -  that should read “put the rest in the recycling bin”.

My son (who is 10) is a real maths enthusiast, so we spent a little while piling them up before they went away, and did some messing around with tetrahedral pyramids, and a touch of gentle finite difference theory to see if we could construct a formula for the number of bottletops in a tetrahedron of side n (and so on). Oh what fun....

We had enough of the smaller tops to make a tetrahedron with a side of 11 tops, it turns out, which our formula tells us contains 286 bottletops. It did occur to me that if I have the spare time to fiddle around with this stuff (it was for the boy, really...) then someone else might have the time to look at a photograph of the event.

We have subsequently thrown them out (though it was a struggle to part with them in the end), together with the other surplus tops which didn’t fit into the construction. Now then, at 500ml a bottle, let’s ponder how much water that represents, and where it has all gone now. And then there’s the gas...