Very quick post today - I'm looking for a bit of information, if anyone can help. I don't think this is at all complicated, but I've read different opinions on this topic, and am uncertain about what to do. 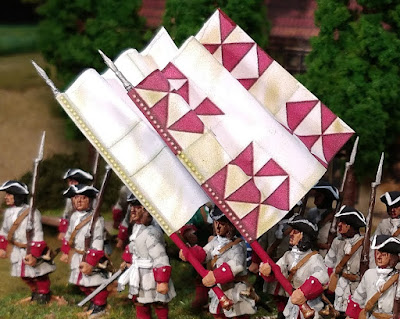 Photo of flags of a French regiment from someone else's army, someone else's blog. Two flags is a nice look - colonel's colour on the left here - is this applicable to all battalions in a French regiment?
My emerging WSS armies use a vanilla, one-size-fits-all-nations establishment scheme. I know that this is probably not awfully clever, but the convenience suits me nicely.

In particular, my infantry battalions consist of 3 bases; two of these have 5 other ranks and 1 officer/NCO (and one of these two bases may contain grenadiers, depending on national practice), and the third one contains 3 other ranks, a standard, a drummer and a mounted colonel.

I'm now starting to plan for the French and British contingents. For each of these nations, I am tempted to be swayed by "the look of the thing" and go for 2 standards per battalion. Now that I've started to read about the French, it is suggested that a regiment's first battalion should carry the colonel's (white) colour and the ordnance (patterned) colour, but the other battalions did not carry the colonel's colour, so that my planned two-battalion French regiments would have 2 flags for the first battalion, but only 1 for the second.

Of course, I've also read sources which say two for each. I'm happy to do two for each anyway, but wondered if there are any strong views? All ideas welcome!