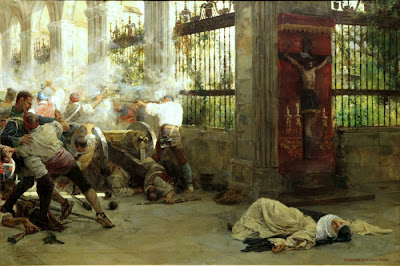 If something is worth doing, my grandmother used to say, it’s probably worth doing over again. Here I was, quite happy with my new Hassle-Be-Gone automated siege rules, and then some insightful comments from Ross on my recent post and an unusually coherent email from De Vries the Impaler sent me back to the drawing board.

One of the truly great things about blogs is that you can get other interested parties to shine some light on your own thoughts, and you can learn a huge amount. [By the way, any fans or students of Water Logic? – I used to be a firm believer in all that creative evaluation stuff, though I seem to have forgotten about it since I stopped being paid to think. I might do a post about it sometime – you have been warned.]

The purpose of my mathematical, off-table siege rules is to strike a workable balance between convenience and realism such that sieges can be handled easily in the background while the campaign rolls on. The tricky bit is finding the correct balance – rephrase that – an acceptable balance.

The part of the siege under particular scrutiny here is the actual assault or storm. For a start, Ross raised the very good point that not all sieges are the same. If the defenders are unusually determined, it can change things. I carefully avoid the use of the word “fanatical” here, since it has kind of rabid overtones. Let us merely identify that there are certain situations and certain armies where the defenders would be prepared to fight for every building, and to sustain unusually high levels of casualties. De Vries’ original suggestion was that the defenders might be “Spanish or mad”, but that won’t do at all.

Further, De Vries cited the Agustina Effect (after the heroic lady celeb from the Siege of Zaragoza), where the civilian populace are prepared to help with manning the guns and the barricades – i.e. commit to a level of active combat over and beyond merely trying to defend their own property. We also agreed that there might be situations (though I’m struggling to think of an example) where the citizens are on the side of the besiegers, and take a part in the attack on the garrison. To put all this into effect, I have changed the calculations of ASS and DSS (as defined in the rules below) in the storm – the defenders can get an extra dice if they are ready to fight for every building (the Suicide Dice - suggestions for a better name will be most welcome), and either the defenders or the attackers might possibly get yet another bonus dice (the Agustina Dice) if the civilians are prepared to fight on their side, during the actual storm. All storms take a week, however they go. 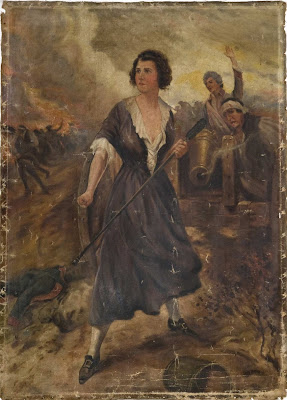 Agustina de Aragon - "No - it's OK. If she really wants to stand there when
we fire, just let her get on with it..."

Ross raised the matter of levels of loss – applying an overall factor to the complete besieging army’s strength to get the casualty figures is over-simplifying things, and may give inconsistent or illogical results. Prof De Vries also pointed out that calculating the besiegers’ losses retrospectively for the whole siege, based on the “total force employed” is, to use his terminology, dumb, for a number of reasons:

(1)  Though the total force, represented by the variable Assault Value (AV) may justifiably be regarded as all at risk during the weekly routine Bombardment Phase (which includes all kinds of missile fire, mining, sorties, hunger, disease, bad breaks and random demoralisation), this number AV will vary from week to week, apart from losses, as a result of troops being detached from the siege, or new troops joining it.

(2) During the actual storm (as Ross also mentioned), only a portion of the total available AV may be called upon to actually assault the place – losses for that week should be restricted to this subset.

(3) In a campaign where weekly returns are made for all units, it makes no sense at all to do the casualty calcs for a siege only when it has ended. It is much better to perform the calcs week by week, as AV varies up and down (or is subdivided), and carry forward the actual totals.

Though still determined to keep this manageably simple, I accept all of this, and the re-tweaked section of the Siege Rules now reads thus:

Each week during a siege, losses for each side are calculated as one tenth of the percentage loss in AV or GV for the week. During a storm, AV(st) replaces AV if it is different. Thus, for example, if AV is reduced from 7 to 6 during a particular week, the actual loss to the besieging army in killed and wounded is 1/10 x 1/7 = 1.4% of the troops present/engaged.