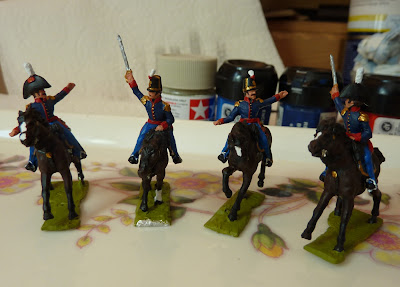 The recipe is as before, except these fellows are mounted on what in Scotland are traditionally known as "cuddies". The recipe? - something like 80% Jorg Schmaeling, 1% superglue, 19% coffee. If they'd all been destined for the same unit I would have varied the horse colours a bit, but it's not worth the bother at one horse per regiment - no-one will notice. It just means that, in addition to the officers clearly all being brothers, their horses are brothers too. 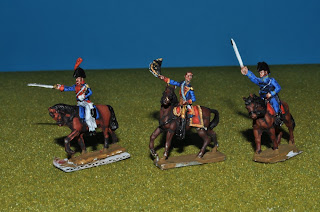 New Falcatas for June include these

My plans for completing my Spanish army may be about to change again, since Falcata have announced some new General Staff figures for June, plus an assortment of new Peninsular War offerings - including light infantry in bicornes and marching militia in round hats. Oh, well.
Posted by MSFoy at 11:46