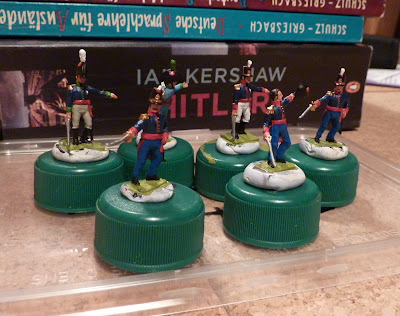 To celebrate my release from eBay packing duties, I got the first six of my converted Spanish infantry officers finished while listening to the Champions League Final this evening. There are four mounted colleagues for them which are about half done, but all the rank & file of the six new units are still to come back from the painter, so I have a couple of days to get them done.

The chaps in the picture were originally Art Miniaturen Dutch-Belgians, and they now have various new hats and heads attached. I'm pleased with them - something very satisfying about non-catalogue figures in your army.
Posted by MSFoy at 23:18