Further to my previous reference to the 150th anniversary commemorative Waterloo game played at the Duke of York's HQ in Chelsea in 1965 (a good year for it, as I'm sure you'll agree, though I have some confusing idea that it took place in March, which would be less appropriate), David very kindly supplied a scan of the photos of the event which were included in Donald Featherstone's Advanced War Games - a book which I used to own, subsequently unloaded on eBay and never bothered to replace.

I have to say, right up front, that I have no right or permission to reproduce this picture, so if anyone is compromised or upset by its appearance here, please shout and I shall delete it. 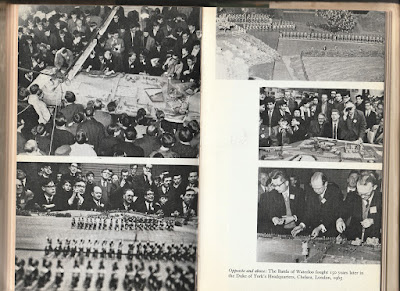 The pictures mostly show the players on the French side - Tony Bath, who took the role of Napoleon, is in evidence, slightly to the right of centre in the two left-hand photos - as we look at the picture, Bath is on the right of the bald-headed man without glasses - he appears also on the right edge of the lower-right photo. The only hope I had of a glimpse of the other army's commanders was the middle image on the right side, but, having spent a little time working out the ground plan of the Hougoumont feature, I am pretty sure that is the end of the table, not the Mont St Jean side - the gentleman with the lapel badge and the opera glasses looks like an official player, though. Frustratingly, we can see the back view of the Allied commanders in the top-left photo.

As I understand it, Eric Knowles was Wellington for the day.

Not to worry - this is all I have for the moment. Does anyone recognise, or can you put names to, the people who are pictured, or even people known to have been there who are not pictured? I believe that the organisers were the British Model Soldier Society, though I am not very sure about that either - any clues, names, links or further photos would be very welcome. These chaps must have been well known at the time. I also read somewhere that the BMSS rather disapproved of wargaming, and thus a separate wargaming section was set up - round about 1965, in fact!

I am deeply impressed by the formal turn-out - even the schoolboys in the crowd wore ties - does that suggest official school parties, or did everyone wear ties then? In passing, the table looks to be about 24 feet x 6 feet - any views on that?

I was sent some links to these photos, which are definitely copyrighted by Alamy, though I understand that it is legal to download the preview versions (as I have done) for non-commercial purposes.