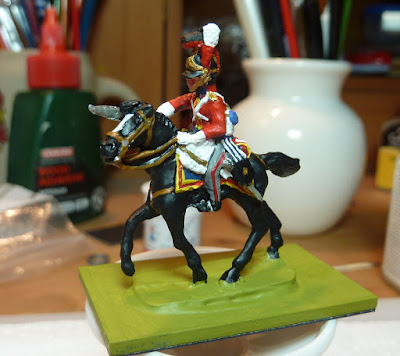 I'm really pleased with this. The refurb job on my ex-Eric Knowles British Royal Horse Guards (for Waterloo) suddenly became rather more complicated when the extra figures (Eric's units were bigger than mine are) offered the chance of making some of them into the Life Guards as well. The numbers were a bit tight - through the marvels of digital communication (and Old School analogue kindness) an extra recruit is now on his way from New Zealand to swell the ranks (will he get a seat to himself, they wondered?), and a broken figure needed to be fixed to complete the establishment.

So here is Trooper Lazarus, now of the Life Guards. The horse was broken off its base, years ago, at ankle/fetlock height - tricky in 20mm. I had both the casualty and his base, in the boxes. No problem for Count Goya's Magical Manufactory of Miniature Marvels - the legs and hooves have been drilled, wire braces inserted and appropriately fiendish glue applied. He's as good as new, matron. Marcus Hinton himself could not tell he'd been repaired.

I'm delighted with him. I couldn't have done this. Thank you very much, Your Excellency.

The rest of the unit will follow along as soon as the chap from The Colonies arrives. Trooper L is thrilled to have the chance of getting back into action after all these years of being dead.
Posted by MSFoy at 21:36