A Fool and His Money - a Brush with Disaster

Since I was getting some hobby-type odds and ends from Amazon, it seemed a reasonable idea to get some cheapo brushes while I was at it. A lot of my brushes are coming to the end of their useful careers, so it does no harm to stock up a bit.

I've moaned about this before, but I have a very frustrating personal history with brushes. On occasions I have treated myself to something really expensive, and have usually been disappointed. Some of the best brushes I ever had were second-quality bin ends from Hobbycraft - very unpredictable. Eventually I get to a position where I have a jam jar full of scruffy wrecks, plus a couple of remaining brushes that will still form a decent point, and then one night I lose a bristle or two, and things start to get a bit tense!

I've been reading some forum or other where the dudes were discussing which budget-priced modelling brushes in the UK were good, reliable value for money. Based on this, I added a couple of packs of Humbrol Palpo brushes to my Amazon order. Sable hair, one each of sizes 000, 0, 2 and 4, about £8.50 or so for a pack of 4 brushes.
They arrived. I think the only relevant word I can think of is "crap". I've had a go with very hot water and the posh brush cleaner, and the only difference is they are probably slightly cleaner crap now.

Very uneven mixture of bristles, trimmed to length with a hatchet, apparently, lumps of dressing on the ends of the tufts. No likelihood of a passable point. I am disgusted.

Don't ever be tempted to buy any of these, chaps.

This follows on from some of the comments. Here are a couple of real veterans. When I was clearing out my parents' house, a few years ago, I came across a lot of my father's old painting equipment. Back in the 1970s he did a lot of hobby painting. He was a very fair watercolourist - a bit photographic for my taste, but pretty good in a draughtsman-like way. He also tried his hand at oils. I found masses of spoiled tubes of paint, and a lot of old brushes. Most of the brushes disintegrated when I checked them - the hair had perished and broken. Amazingly, though, some of them were OK. 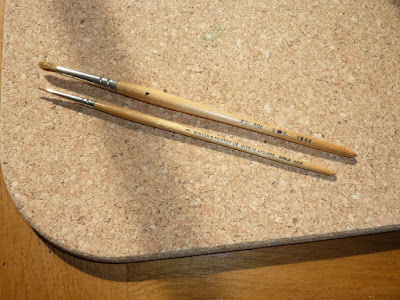 I found quite a few of these - they had been used, but not much, so I acquired them for my soldier painting. These are Winsor & Newton, as you see (I've included one side of each brush in the picture - they were all marked like this on the two sides. They are also, I'm faintly embarrassed to observe, stamped by HM Stationery Office in 1966, so I guess my dad liberated them from the office stores when he worked for HM Government.

The big fellow is worn down - evidence of my dry-brushing resin thatched roofs? The No.1 has probably slimmed down a bit, but is still one of my in-use brushes. Now, I'm not saying these have been used continuously since 1966 - clearly that's not so - but they have been used regularly by me in the last couple of years and there is no sign of degradation of the sable since manufacture 53 years ago.