Hooptedoodle #339: Kevin and the Genie 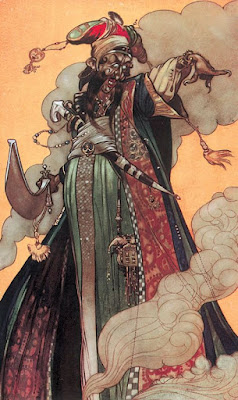 The Genie seemed to be getting a little impatient.

"Righto - that's the 200 million euros in a secret Swiss bank account, and the lifetime supply of Flamin' Hot Nacho Cheese-flavour Doritos all arranged - you have one wish left."

"Gosh," said Kevin, "this really is difficult - I don't know what to choose! I'm trying to decide what my favourite brand of chocolate is."

The Genie was now definitely getting a little impatient.

"Look," he said, "I'm really very grateful to you for releasing me from the lamp, and all that, but I've been stuck in there for a thousand years, and I've some catching up to do, so if we could get on with it...?"

Kevin was not outfaced.

"I understand that I can put you back in the lamp at any time until I've had my three wishes granted, isn't that right?" and he held the stopper threateningly, over the top of the lamp. "If I hadn't been given the job of clearing out my Grannie's attic you would still be in there, wouldn't you? - so give me a minute or two to think of something. I'm not sure just what you are able to do, you see - you couldn't give me some ideas?"

The Genie sighed. If you've never heard a Genie sigh, it's a sound you really don't forget in a hurry.

"Well, so far you've exhibited the usual level of greed I expect in these situations - with respect, of course," he added, hastily, glancing at the stopper in Kevin's hand. "Why don't you wish for something which is of some good to the rest of the world, apart from yourself?"

Kevin pondered this for a minute.

"I know," he said, "there's terrible trouble in the Middle East recently - a lot of fighting and religious hatred - terrible misery and suffering in Syria, Yemen, Gaza, places like that. Could you fix that, and make the area peaceful again?"

"Hmmm," murmured the Genie, "that's a refreshing idea - that might be a possibility. The names don't mean anything to me - they may be modern names - where is this place?"

Kevin rushed off and fetched his old Philip's World Atlas for Schools, and opened it at the Middle East. The Genie studied it carefully, but became very uneasy.

"Look - I'm really sorry," he said. "The names are unfamiliar, but I recognise the maps - I know these places well - the people here have hated each other for thousands of years. I don't like to say this, but you've come up with something I really don't think I can do anything about. Too vast a problem - too long a history of trouble. I am sorry, Kevin - it was a really good idea, though. Is there anything else I can do for you? - something a bit easier?"

Kevin became thoughtful for a while. Then he brightened up a little.

"Well, this may seem silly, but I play wargames - battles with model soldiers - with some friends, and we regularly have difficulties trying to arrange our rules to encourage the proper use of off-table reserves. It really doesn't work very well. Since you have knowledge of all the wise things that have ever been done, could you come up with a solution for this problem?"

The Genie just stared at him.

"Let's have another look at that map of the Middle East?" he said.