Since domestic life is currently a bit unpredictable (as a result of the Contesse being engaged pretty much full-time getting her mother settled in a new home, in another town - a story for another time - in the pub, for preference), I've been watching DVDs late in the evenings for the last week or two. 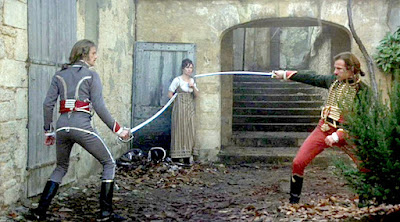 A few days ago I watched Scott Ridley's super The Duellists for the umpteenth time - always a delight. Knowing the end of the story actually makes for a more relaxed experience. I haven't watched it quite as many times as Bondarchuk's Waterloo, I believe, but it must be getting close.

I've also taken the opportunity to revisit some other Napoleonic titles - some that I've promised myself I would get back to, and a couple that I may never have watched before - at least I didn't remember much of them. [Three upsides of failing memory are (1) no repeats on TV; (2) you make new friends every day; (3) no repeats on TV.]

A couple of nights ago I watched Sacha Guitry's rather quirky Napoleon from 1955. My viewing experience was a little hampered by my having the only edition I could afford - this has dubbed English dialogue, and it is (I think) a Korean-manufactured version which is so heavily compressed that the picture quality is nostalgically reminiscent of those pirated video tapes we used to watch in the last century - or somebody watched them - your grannie will tell you.

The story is threaded together by the rather interesting idea of having the scenes from Napoleon's life narrated (at a social evening) by an elderly Talleyrand (played by Guitry himself). Once you've got used to the strangely detached dubbed speech, and - in my case - the fuzzy pictures, it goes along quite well. Good show at the Coronation - very snazzy. Battle scenes were hampered by lack of resources, but they were mostly cameo shots of a victorious flag, or similar. One major hiccup for me was that they use two different actors for Napoleon, Daniel Gélin as young NB, and Raymond Pellegrin as an older imposter later on. They do not look remotely similar. They even make a feature of the changeover - young, slim Napoleon sits down for a haircut, and after it everyone remarks that he looks completely different. Yes - he does. Never since the glorious Plan 9 from Outer Space has there been such a show-stopping continuity failure. 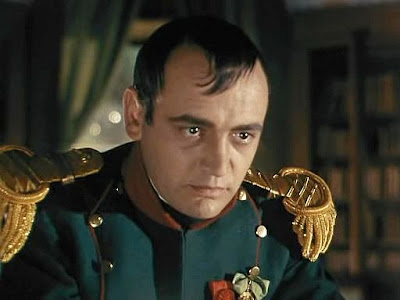 One thing that I was struck by was the scene where the marshals confront Napoleon and ask him to abdicate - this looks, and plays, so like the similar scene at the start of Waterloo that I would guess Bondarchuk was very familiar with the earlier movie. Anyway, overall I rather enjoyed it - I wouldn't mind a better-restored copy, but I might well watch it again. I mean - Jean Gabin as Lannes - Yves Montand as Lefebvre - you have to watch it again, don't you? 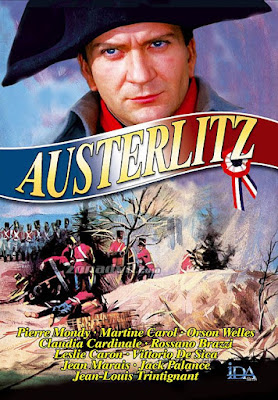 Last night I watched Abel Gance's Austerlitz from 1960. No complaints about the picture quality here - superbly restored, and the original film was very heavy on the composition and photography - no expense spared, beautifully filmed, and the Coronation in this film blows Guitry's (which certainly wasn't bad) out of the water. The visual side of things is hardly impaired by the presence of Claudia Cardinale, Lesley Caron and numerous other delectable ladies in the roles of Napoleon's assorted sisters and mistresses - and we even get Anna Moffo singing, which was an unexpected treat. Yes - all that is splendid - sumptuous, in fact.

I have to admit at this point that one problem for me was the dialogue. I read French pretty well, but my understanding of spoken French is helped greatly if there is a teacher at the front, writing it down in chalk on the board. So I am a subtitles man. English subtitles, of course, if they have them (many French films do not), but I can manage well enough with French subtitles - you know, for the hard of hearing (pardon?). This DVD is advertised as having just French subtitles, but they only kick in when Kutuzov and his chums are speaking Russian, or when Pitt and Fox and those other rascals are speaking what I can only assume was supposed to be English. The rest of the time I was left to flounder on, picking up the gist of what was going on. In fact, it wasn't too bad - I sort of managed, though I might have some difficulty explaining exactly why Napoleon was so offended by what Pauline said at the soirée after about an hour.

The film lasts almost 3 hours, which is a little gruelling if you are struggling with the lingo, but it went well enough for me to list it for another viewing fairly soon. The role of Napoleon is played by Pierre Mondy, who is basically a comedy actor - he seems to have been chosen because he was short, and because he produces a number of fantastic, bravura tantrums; this is the most vase-throwing, screaming Napoleon I have seen - is this what he was like? Should we be glad that Gance never made a biopic about Hitler?

The military stuff. Hmm. One has to rise above the petty outrage of their using the wrong belt-buckles or sword knots (or whatever). They did a brave job of putting on the battles, though the instantaneous cuts between outdoors and very-obvious-sets-in-a-very-big-hall jar a bit at times. Given the inevitable difficulty of staging a massed battle with a limited number of extras (Bondarchuk, remember, did not have this problem with Waterloo), it's quite spectacular, but I really didn't understand much of what was going on. I must watch it again, if only for the actual Austerlitz bit at the end. The director was obviously very taken with shots of formless crowds of cavalry racing across the fields, usually with a marshal galloping about 200 yards in front, waving his sabre (this may be why there were so many openings for promotion). There is relatively little infantry action.

I confess that I am not completely clear on all this. At one point Lannes (I think) is leading some charging cavalry (which includes the Chasseurs à Cheval of the Guard), and he clashes with the enemy, and then Murat (with some more charging cavalry, also including the Guard Chasseurs) appears on his left, and things are going swimmingly. Meanwhile, Soult, who is itching to get involved, is sent by Napoleon, with very explicit instructions where to advance and so on. As far as I could see, Soult was then leading another cavalry charge. I'll suspend judgement on this until I've watched it again.

The French won, of course, but the biggest surprise for me came at the end. Having spent the day galloping around sunlit fields, the defeated enemy were suddenly retreating through a winter scene - snowfields - and (unwisely) opted to retreat over a frozen lake. You'll never credit this, but the French artillery put some cannonballs through the ice, and - yes, that's right - there was much spectacular footage of limber teams and foot soldiers falling through the ice. Good heavens, I hear you gasp. [Discuss]

This all started because I had intended to re-run the French TV mini-series of Napoleon (that's right - the one with Dupardieu and all that lot), which has been sitting waiting for me for a couple of years - I'll get to it, but in the meantime I'm rather enjoying being distracted.

One serious commitment, of course, is that I need to make a decent attempt at watching the re-issue of Gance's 1927 classic, Napoleon (great title), for which I now have the greatly enhanced 2016 edition, with fabby music score by Carl Davis, wonderful digital restoration, lots of extra material somebody found somewhere - what's not to love? Also the magnificently smouldering Albert Dieudonné as the ectomorphic (and apparently quite tall) young Napoleon - this is compulsive viewing, except...

Well, to be ignorant about it, I need drugs to get through it. It weighs in at 5-and-a-half hours and it was, of course, a silent film, so that the acting is a bit extreme throughout. In fact, you get the hang of that, and Davis' score helps greatly with the silent bit - quick example: at one point young Rouget de Lisle is stood up before the Revolutionary crowd, and the scene becomes a complete tour de force as the whole place joins in fervent singing of his new hit, La Marseillaise. Quite how this scene would have worked in the silent version is a point of interest, but of course the new musical score fills it out nicely.

The problem, for me, is that Gance was obviously obsessed with the possibility of making very long scenes, in this virtually unlimited-scope sortie in what was still a new and largely experimental medium. Some of these scenes almost seem to have been left to run, in the hope that they eventually become interesting, or maybe in hope that the relatively unsophisticated cinema audiences of the day might eventually get the idea of what was happening. I can, of course, accept all this for what it is, though 15 minutes into the snowfight at Napoleon's school I was definitely getting twitchy. No - I will make a proper effort at watching the whole thing - I need to check the diary for a consecutive run of evenings, and give it a go. If Napoleon could conquer most of Europe, I'm certain I can get through a damn movie.

A couple of trivia items - there is a cameo appearance by Beethoven in both Gance's 1927 film and Guitry's 1955 one; and Orson Welles, apart from playing Fat Louis XVIII in Waterloo, also appears as Hudson Lowe (boo, hiss) in the Guitry movie, and as Robert Fulton, the American inventor, who appears in Gance's 1960 effort, trying to interest Napoleon in his ideas on steam-powered warships - this all rather earlier than Trafalgar.

[You will gather that I am not an expert in this field. I know so little, in fact, that I even talk about "films", in the plural, rather than "film", in the approved singular.]
Posted by MSFoy at 11:49