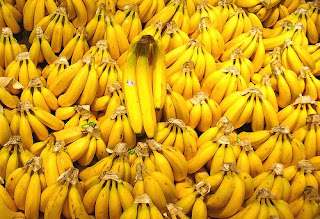 As it happens, I live in Scotland - a beautiful country, to be sure, but not noted for growing bananas. I like bananas very much - I eat a lot of them, they are good for you, contain a lot of useful minerals and all that, and come with an ingenious built-in hygienic packaging which makes them ideal for snacks and lunch-boxes. And - proverbially - they have no bones.
Recently I was on holiday in Italy, which was terrific for a lot of reasons, but one day we bought some bananas from a market stall.
Hey.
Fantastic. I was suddenly reminded how bananas used to taste when I was a kid. That banana flavour that you get in sweets and banana ice-cream, you know? Banana. It's been so long that I'd forgotten.
Now the thing that puzzles me is that they don't grow bananas in Italy, either, so presumably their market stalls are supplied by the same sort of refrigerated articulated wagons that we use in Britain. And - presumably - their bananas are also grown in the same parts of the world as ours.
So what is going on? This is not a trivial matter - bananas may never be the same again for me, and moving to Italy is probably not a possibility - I just need to understand why...
Posted by MSFoy at 13:06