Hooptedoodle #286 - A Brief Journey into the Unknown

Saturday was the day for my exciting trip to Perth & Kinross, which is unusually exotic for someone who doesn't get out much. Since I am not too confident about the last bit of the route, I transferred the satnav from my car into the van and loaded up the route. It is a very ancient Garmin Nuvi 250 - the only reason I persist with it is because I invested in a lifetime supply of map updates. Whether it is for my own lifetime or the device's is a matter of moot - I could never raise the courage to find out. 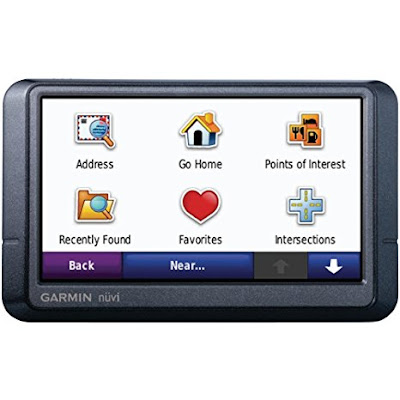 I was aware that there would be a strange bit in the middle of the run, since, though my maps were updated pretty recently, they predate the September opening of the new Forth road bridge, the Queensferry Crossing. I was interested to see what Martina (Ms Satnavrilova, the resident female voice in the device) would make of the lack of information.

Last time Martina had a nervous collapse was some years ago, on a very wet day in Inverness, when she got into an eternal loop in the one-way system, and the display briefly turned psychedelic before I switched her off, out of sympathy as much as irritation.

On Saturday, probably predictably, as I left the approach road for the old bridge, the display showed that I was travelling through a clear white space (previously farm fields), which became a clear blue space as I reached the water. There was the usual image of the rear of a car in the middle, but the rest of the display was blank. Martina said, "recalculating...  recalculating... recalculating..." over and over, for about 3 or 4 minutes, and then sort of trailed off. The display still showed me heading off into the unknown - although the view outside the windscreen was of traffic, and of the road over the new bridge on a nice sunny morning, the display made me feel rather lonely - almost homesick. I felt a bit like the Voyager spacecraft heading into the depths of space.

As I approached the other side, Martina suddenly brightened up, though she didn't sound too confident.

"In one mile," she announced, "enter roundabout...", though there was nothing on the screen apart from the little car. Soon after, the road joined the Northern approach for the old bridge, and Martina was back to her businesslike self.

"Enter roundabout, and take first exit...", and normal service was restored. It was amusing to see what had happened, but I have to say it is not comfortable to behold that you are lost at sea. Today I am updating the maps again - that should sort it. Mind you, even the latest Garmin updates still give warning of a temporary 40mph speed limit on the A720, the Edinburgh By-pass, between Sheriffhall and Musselburgh, which was removed at the end of a spell of roadworks in about 2007. I keep a careful eye on Martina for signs of dementia. As it used to say in the audit manual, Trust but Verify.