Well, because playing a game via Zoom was a new experience for us, I had spent some time this week working on camera angles, and lighting (which sounds grand, but was mostly a matter of which lights to switch on, which curtains to close to avoid table-shine and that strange effect you get when the electric lights are on but the far end of the table is in bright sunshine).

All went very well - this techy stuff is well tried and tested now, and was only really new to us greenhorns, so I shall avoid pretending it was stressful or dramatic, or even particularly clever; the game went well - we finished (just) in the scheduled 3 hours, and we learned quite a bit. Interesting. It was a very good day, I think - a lot of fun, apart from anything else.

We started at 10:30am, Goya commanding the French, Stryker the Anglo-Portuguese allies. The scene was General Craufurd's strange episode on the River Coa. The game was chosen because it is not too big (for a first bash at Zoom, like) - we used my scenario rather than the official C&CN #006 from the book (I was a bit affronted by the fact that the official scenario gives Craufurd a couple of gratuitous British Line battalions, just to balance the game - my usual crib about the official scenarios, in fact).

Our game paralleled quite a few areas of the real battle - interesting. Craufurd should, by rights, have retreated across the only bridge over the Coa a day or so before he did. He was certainly instructed to do so by his Commander in Chief - in the event he hung on, while Ney's VI Corps bore down on him; presumably he had hopes of gaining some kind of personal triumph against the advance guard, but he risked his entire Light Division with no real justification - he was still going to have to retreat eventually. Still, I guess you had to be there, as they say - it's all very well being smart about it now...

Our game required the accumulation of 7 Victory Points for a win - there was some fancy stuff around the availability of extra VPs for successful evacuation of Craufurd's units across the river, and there was also the issue of having a train of wagons and mules to evacuate, too. The challenge for Craufurd was knowing when to cut and run.

It was very close. These games are usually very close, but this one was probably the closest yet [cue rolling of eyes]. Craufurd himself spent some of the early part of the game resting (apparently) in a wood, but he manoeuvred his little army with skill, through a series of reverses. He evacuated half the wagon/mule train (the other half was destroyed by the French cavalry), he also evacuated 2 of his combat units, and he inflicted enough damage on the enemy to amass 6 VPs - at this stage the French, whose VP all came from eliminating Craufurd's units, had also got to 6 VPs.

Craufurd himself, with a battalion of the Rifles, was on the bridge at that moment, and his next turn would allow him to march them over the river to safety, to get the required 7th VP.

Didn't happen - his turn never came. The French threw in the last of all they had on their left flank, including a charge on the battered 14th Light Dragoons by the last intact battalion, the 1/66eme, led by General Ferey himself. Since the 14LD were not in good shape, and did not have room for the approved Retire & Reform ploy, the infantry won this scrap - a rare example of an attack column defeating horsemen - and the game was over, leaving Craufurd to go to discuss his day with Wellington.

Excellent fun - we didn't learn too much from things that went badly, because there weren't many at all - about all I can think of was that the usual red loss counters do not show up well on camera, so we'll use white in future. One important skill in learning, I think, is to make sure you remember the things that did work - and there was plenty of scope for that.

My colleagues, of course, mucked in with their usual excellent enthusiasm and good humour, which was a massive contributor to our success. I was the umpire and general labourer, and it is quite hard work, but I had a terrific time - from time to time I felt apprehensive, because I was charging about, hyperventilating, while my guests were really only getting to watch through the keyhole, but it seems that everything was fine at their end too.

I think it proved worthwhile spending time and attention on the hardware - we had my Android tablet on a high stand - some 7 feet up in the air - as the main camera, at one end of the table, and my iPhone - also 7 feet up (and permanently connected to its charger, since Zoom will flatten a phone battery in no time at all - please take note!) - as the second camera, at the other end. The iPhone attended as a separate guest - Max Foy, in fact, who has his own Zoom account (not many of Napoleon's generals have Zoom accounts, I think). It also proved to have been a good idea to invest some time in setting up a grid reference system for the hex table, and to produce some good maps for the players.

My thanks, as ever, to Goya and Stryker for being such good chaps and making the game a success. Now that we have some experience, we are considering allowing one or two guests/observers to drop in on future games - we'll have to weigh that up, since there isn't a lot of time for chat, but it's all good so far!

One thing I was aware of was the lack of time to take decent photos, so apologies for the unbalanced set I managed to salvage - in particular the end of the game was a little frenzied, so there is a shortage of pictures of the climax! It's worth saying, I think, that playing a game by videoconference introduces a lot of obvious challenges, but it also encourages the players to be very methodical about following orderly turn sequences, for example, and this actually helped the game to run smoothly.

Points duly noted! Oh - yes - being umpire is fun but it's a bit of a work-out - I recommend a bottle of Lucozade on stand-by!

I received a couple of questions about the reference letters around the edges of the table - this was to make it easier to match the table up with the "official" set-up map I sent to the generals. Here's the map: 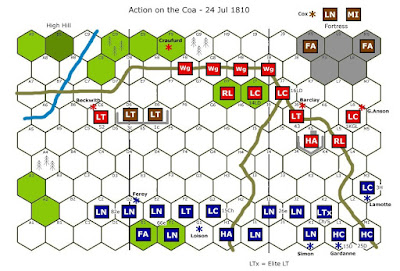